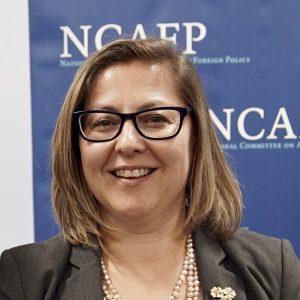 Daniela Kaisth is Founder and President of Gratias Partners (GP), a philanthropy advisory firm that helps donors to give more effectively and non-profits to develop new initiatives through collaboration and high-impact philanthropy. She has over 25 years of experience launching philanthropic programs globally, raising over $100 million in philanthropic funds and $1 billion in program funds for higher education, refugees, and social impact. She currently manages a family foundation in New York, coordinates a funders collaborative in the British Virgin Islands, leads a public-private partnership to rescue threatened scholars in Germany, and consults for higher education institutions, foundations, and non-profits in Benin, Bhutan, India, the Netherlands, and the United States. She recently served as Vice President of Development for the East-West Institute (EWI), a think tank devoted to conflict resolution with work in China, Russia, the Middle East, South Asia, and the Balkans.

From 2005 to 2015, Daniela was a Vice President at the Institute of International Education (IIE), where she managed development, communications, and emergency services, leading the establishment of IIE’s Scholar Rescue Fund (SRF), Syria Consortium, and Artist Protection Fund. Since 2002, SRF has saved the lives and work of over 840 threatened scholars from 59 countries, placing them at more than 415 host partner institutions in 47 countries around the world.  The program is now being replicated in other countries, most notably Germany and France. In 2009, Daniela published Scholar Rescue in the Modern World with Dr. Henry G. Jarecki, former Vice Chairman of IIE and Chairman Emeritus of SRF.

Daniela has an M.A. from Carleton University’s Norman Paterson School of International Affairs (NPSIA), a Diploma from the Johns Hopkins School of Advanced International Studies (SAIS), and a B.A. from The Johns Hopkins University, where she graduated Phi Beta Kappa. She serves on the boards or advisory councils of Princeton in Africa, The Johns Hopkins University, SAIS, The IC3 Institute, Artistic Freedom Initiative, EngageAsia, and Ben’s Lighthouse. She leads a Refugee Giving Circle as well as an Innovation Working Group in Philanthropy, which gathers leaders from various sectors to discuss how innovations such as design thinking, systems change, impact investing, humanitarian storytelling, and blockchain can improve the impact and effectiveness of philanthropic work.